“Kaala Pani”: A Tribute to the Intrepid Freedom Fighters

In the last five years I have been to Port Blair, the head quarters of Andaman and Nicobar islands, twice. A great place for scuba-diving and snorkeling, excellent food and very warm, hospitable people. But this is not what this post is about, it is about one dreaded chapter from the colonial times. The Cellular Jail, or “Kala Paani” as it is better known as, is a monument to those brave young men of India who endured unspeakable sufferings in their urgent quest for India’s freedom. A jail where countless were imprisoned, many never to come out alive. Many maimed and handicapped for life. Cellular Jail, that bleak, morbid, and devilish-looking structure of black stone-and-bricks standing upright in the midst of the expanse of deep, dark seas. Kaala Paani, indeed!

I will not go into the history of the prison; there are countless websites with all the details. Suffice it to say that this was constructed between 1896- 1906 to house prisoners from mainland India. Initially meant for hardcore criminals, but quickly converted into an imprisonment for those intrepid warriors of freedom. Each prisoner was assigned a room. Should a single-seater room sound a luxury, consider this: each of these room was a 13X6 feet affair. There was a door- made of solid steel rods-  which was bolted from outside such that it could not be opened by the person within. There was a narrow cot to sleep upon, and there was nothing else in the cell. There was a ventilator, but that was just to let in some light and air; its height was such that the inmate could not look outside. And no going out to the bathroom to relieve oneself at nights. The inmate was issued a bowl into which he had to urinate and defecate after sunset and clean up after dawn when you were allowed outside the cell.

Total isolation from sunset to sunrise, and during the day, there was hard labour. Real hard labour. Sample this: there was a task allocation of any of the following: producing “x” seers of ropes from coconut husk using some medieval back-breaking technology, milling “y” seers of oil in a mill, harnessed like oxen to a devilish-looking contraption or simply constructing more cells for this hell-house. And if the prisoner demurred, he was awarded dozens of whip-lashes in full public view. This served a dual purpose, pain and public humiliation as a punishment for him and a deterrent for the others. If he was even worse “behaved”, there was a creative series of handcuffs to entrap him in. The jailor chose the methodology depending upon his assessment of the severity of the crime. One type of handcuffs would keep the prisoner’s hands free and just the legs were fettered, while the other would shackle his hands and legs while the third would shackle his entire body and make him wonder why he was alive, at all. And if he chose to be completely uncooperative, hanging-to-death was the preferred punishment. The gallows were generous-sized, so at least in death you had the company of others. Three inmates were hung together and there was a convenient located platform nearby to perform the last rituals for the deceased. Small mercies; last rites were allowed. 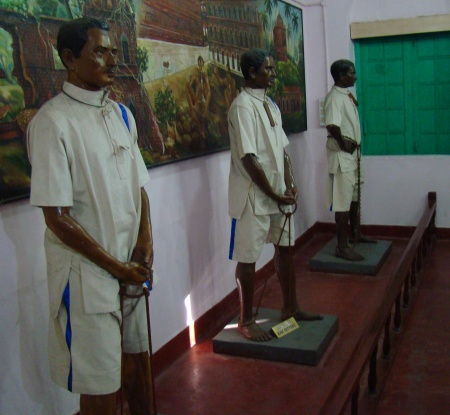 The Three Types of Shackles 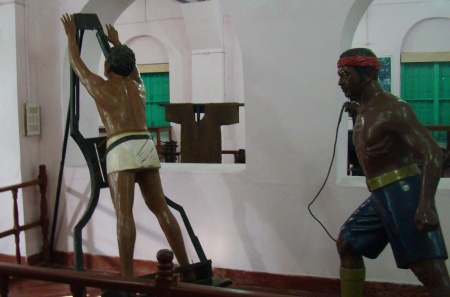 Tableaux Depicting the Whipping Punishment. (This was done right in the center of the courtyard)

Food was completely inedible, weevil-infested rotis, some wild leaves and grass cooked as subzi and often worm-infested rainwater to slake the thirst. Wonder if all this mattered, the prisoners were hardly in a shape to eat after all the hardships they underwent through the day.

This was the jail where some of the bravest sons of Mother India were incarcerated. Batukeshwar Dutt, who along with Bhagat Singh bombed the Assembly in Delhi, the Moplah Rebels, the revolutionaries of the Chiittagong Uprising, Gadar Party revolutionaries, those named in the Alipore Conspiracy Case. And the most famous one of them all, Veer Savarkar who was sentenced for 50 years in 1910 but released after 11 years in 1921; in what some believe to be somewhat controversial circumstances. His cell, at the end of long, long corridor on the first floor of the prison, is perhaps the only one in the complex which is identified as a specific prisoner’s.

In my first trip to the Cellular Jail, I had a colleague of mine from Uttar Pradesh, Rajeev, who mentioned that the family folklore said that one of the family- Gaya Prasad- had become a revolutionary and been jailed in the kaala pani. Mercifully, the names of the prisoners have been enshrined on marble slabs in the jail premises and our group searched out the name of Gaya Prasad. Rajeev, understandably, was a proud man posing next to the slab bearing his ancestor’s name:

Rajeev next to the tablet bearing the name of his relative Gayaprasad at #4 in the United Provinces list; Batukeswar Datta's name is at #2

Please visit Port Blair at least once in case you have not done so far. Visit the galleries where the horrors of the cell-jail are depicted. See for yourself the hardships some of our freedom fighters went through. Walk through the jail corridors, visit the gallows (do not miss the pit underneath where bodies would dangle, three at a time, as I mentioned earlier). Walk up to the platform where the dead were given there last rites. Walk up to the ramparts of the central watch-tower and gaze at the foreboding deep blue-black ocean which would prevent even the most prolific swimmer from contemplating escape.

Think of the unbelievable sacrifice thousands of young men made, in the prime of their lives, for the cause of India’s freedom.

After the sound-and-light show post dusk we walk back towards our tourist coach to be ferried back to the hotel we are staying in. The audio-visual imagery haunting us. Naseeruddin Shah’s baritone narrating the Cellular Jail story backed with great lighting arrangements, music, choruses and voice-overs. None in the group speaks, none is able to speak. We are all overwhelmed by what we had experienced over the last few hours. Then, suddenly, one of the vocal ones in the group cannot resist himself and makes a comment, “Such a prime place should be put to good use. Maybe the government should arrange a tour of this place for the politicians of today.

The quietest in our group mumbles nearly inaudibly: “We could actually go a little beyond this, some of our politicians should be imprisoned here for a few decades. Let them really understand what some of our freedom fighters really went through. That will teach these guys a lesson. And shame them. Besides effectively keeping them off the affairs of this country.”

I hear this chatter. I nod in agreement. But then it dawns on me, won’t that be sullying the very monument to those valiant freedom-fighters! Maybe we should just leave the Cellular Jail alone. And find better ways to fix the the corrupt among the politicians.