Blast from the past: TRISHUL 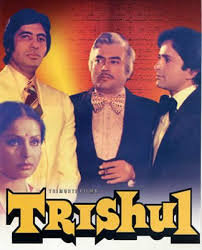 Here is one more post I did for Atul’s remarkable blog http://atulsongaday.wordpress.com/ . Enjoy!!

May 5th 1978 was a most awaited day for an Amitabh Bachchan fan. That day his latest movie Trishul got released. Zanjeer, Deewar, Sholay, Adalat and Khoon Pasina had been released in the preceding years and had proved to be super-duper hits. Amitabh Bachchan’s distinctive “positioning” as the “angry young man” in the rather cluttered world of Bollywood heroes was firmly established. That the above-mentioned movies were interspersed with blockbusters like Kabhi Kabhie (romantic hero) and Amar Akbar Anthony (comedian) only helped to intensify the hero’s aura among his fans.

Yours truly, then a gangly teenager growing up in Jamshedpur, was one of his millions fans. Jamshedpur, in small town India with five cinema halls, four of them were called “talkies” (like Basant Talkies, Regal Talkies) and the fifth reverentially known as “cinema”; Natraj was its name, Natraj cinema. The nomenclature perhaps drew its source from the fact that Natraj was the newest cinema in town and it was the only one to have air-conditioning and push-back chairs in the “Dress Circle” section. (The others had intermittently working ceiling fans and torn seat cushions). Of course the ticket price was higher for Natraj Cinema as compared with the lowly talkies. Rs 3.72 for a first class ticket in Natraj and Rs 3.15 for one in the talkies.

I have digressed. Let me now tell you why the date was so important. Jamshedpur was participating in a simultaneous all India release. Trishul was premiered on in Jamshedpur on the same day as its all India release!! Truly historic for a kid in the city used to seeing “new” movies only after a few months after its release in the metros and other lucrative circuits. So how could I miss the first-day-first-show of this movie!

Together with my regular movie-going pal, we figured out a way of raising the finances and also – more importantly-  an excuse to stay away from home during those hours. Soon enough I was groping my way into the darkness towards my seat in Natraj Cinema.

After a rather long build-up, Amitabh Bachchan emerges on the screen through a cloud of smoke-and-dust at a construction site. The lanky Amitabh with fitted jacket and trousers, puffing at a bidi. He puts his bidi to a better use when he nonchalantly picks up the fuse of the dynamite and lights it up casually. He unhurriedly walks away from the site even as we see his co-workers running away from the blasting area. When the cloud clears after this most recent blast, his colleagues asked him how he could do it without being scared. His reply,”Jisney pachchis saal sey apni maa ko dheerey-dheerey marety dekha hai, usey maut sey dar kaisa?” I still remember to this day the thunderous applause this dialogue received from the already noisy crowd in the Cinema! Needless to say, my friend and I were two of the more voluble ones!

The magic had begun!

The magic had actually begun twenty minutes prior when the director, Yash Chopra, started laying the foundations of the story.

Young R. K. Gupta (Sanjeev Kumar) is in love with Shanti (Waheeda Rehman). His mother (I forget her real name now, Sudha something?) persuades him to marry Kamini (Priya Siddharth) who is his boss’ daughter. (Compare and reflect on the meanings of Shanti (the wronged one’s name) and Kamini, the usurper’s!). The boss is a construction magnate in Delhi.

R.K. Gupta succumbs and ditches Shanti who most “stoically” wishes him well and informs him that she is carrying her child. And that she does not need his patronage, as she does not want to assuage his guilt feelings of being a ditcher. She declares she is leaving town and that she will most certainly bear their child. She works on construction sites to support the child, a son. She, of course, dies rather prematurely and her son swears to take revenge on his biological father, RK Gupta, who has now inherited his father-in-law’s business and is now the biggest builder in Delhi.

That child happens to be Vijay (Amitabh Bachchan).

He walks into Delhi, penniless, “merey paas paanch footi kaudiyaan bhi nahin hain”, as he informs his father in their first encounter. He demolishes competition with devices fair-and-foul and soon rivals RK Gupta’s empire and finally bests him. Along the way he meets his half brother, Shekhar, (Shashi Kapoor), and his half-sister (Poonam Dhillon’s debut movie). He befriends an RK Gupta loyalist Geeta (Raakhi) and nearly ensnares Sheetal Verma (Hema Mailni). What a multi-starrer! Throw in some more in the picture, Sachin, Yunus Parvez, Prem Chopra etc., etc. Total multi-starrer!

The crowd in that first-day-first-show in Natraj is besides itself with joy, admiration, and adulation! We are supporting Vijay- and his Shanti Constructions- all the way in its contest with the “RK and Sons” banner. Till, after the denoument in the movie, this hoarding transposes into “Shanti Raj Constructions”.

This song is from a party thrown by AB; Shashi Kapoor and Hema Mailni celebrating the joys of love; by dancing, and singing. “Mohabbat bade kaam ki cheez hai”. Shashi Kapoor in his jerky but lovable self and Hema Malini as only Hema Malini would. AB, who is the host, responds with “Ye bekaam, bekaar si cheez hai”- utterly useless stuff this romance is. This is understandable, considering the tribulations his mom went though. “Kitabon mein chhatptey hain chahat key kissey, haqeeqat ki duniya mein chaahat nahin hai” , AB goes on to sing in Yesu Das’ voice.

This entry was posted on Friday, March 25th, 2011 at 5:39 pm and is filed under Uncategorized. You can follow any responses to this entry through the RSS 2.0 feed. You can leave a response, or trackback from your own site.

One Response to Blast from the past: TRISHUL