A meeting with Swami Kamalnayanji, my tauji 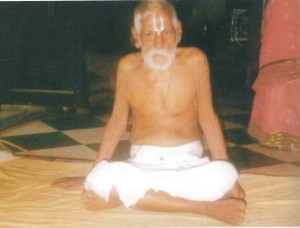 The picture you see above is of Swami Kamalnayan.  This post is a rather extra-ordinary story about Swamiji who is the chief protagonist and my brief encounter with him.

Kanti Ojha left his house when he was ten years old, some 110 years ago. He was studying in Patna, Sanskrit perhaps. He met a group of Sadhus who influenced him enough for him to take-off with them.  He spent a few years in the Himalayas learning all about what he did about the Vaishnavite Ramanujacharya sect.

Ramanujacharya is a well-known name from Tamilnadu. A leading 11th-century saint who has a major following even now. Specially among the Iyengar Brahmins of Tamil Nadu. He wrote “Sri Bhashya” which is a commentary on Vedantic sutras. Ramanujacharya established the Vaishnav temple at Sri Rangam (near Trichy, Tamil Nadu),  a revered destination for Vaishnavites even till date.

After years of peregrinations, Kanti Ojha finally settled in Ayodhya, Uttar Pradesh. And in the manner of all those who renounce the world, had taken on the new name of Swami Kamalnayan.

Swamiji’s mother was, understandingly, quite distraught at her son’s disappearance.  She searched far and wide, but to no avail. And then 25 years after Swamiji left home she “discovered” him. Through another relative who, for reasons not known to me, had somehow figured out where Swamiji was. Swamiji met his disconsolate mother who urged him to return home as she was missing his presence. Swamiji refused to budge. But in all fairness he did get her to spend a few months at his Mandir. But Swamiji would meet his mother only in the afternoons. Between 1 and 2 pm.  When not many were around but for Swamiji’s trusted people.

On her next trip many years later, Swamiji told her that his mother need not miss him anymore. He was there with her. Mother had just delivered a baby boy.

That baby boy was my father, Swamiji’s youngest brother. The aforementioned mother was my grandmother (daadi) and Swamiji, of course, my uncle, or tau. Badka Babuji as we call them in my mother tongue, Bhojpuri.

And in the years following Swami Kamalnayan worked his way up to be the head of Ayodhya’s Vijay Raghav Mandir, the mahant. He was also one of the key policy-makers of the Ramanujacharya sect. He died some ten years ago at the ripe old age of 100. 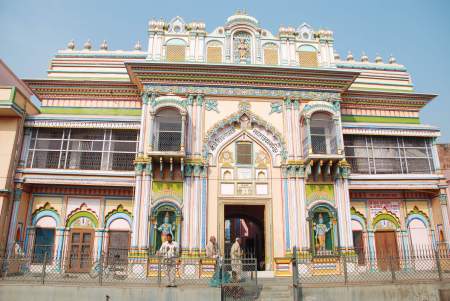 A few decades later, I was visiting Ayodhya on an official trip. I was then based in Delhi working in a consumer products company. Rural-marketing was a new rage then, way back in early 90’s when the now-famous economic liberalization was just taking shape. I was involved with a new rural-marketing pilot project in Uttar Pradesh where we would venture into the interiors of a couple of districts of UP selling whatever we sold. One of the districts happened to be Faizabad and that’s where I landed to check-out this new initiative. The markets involved were villages around Ayodhya and I would spend morning to night travelling and seeing for myself the reactions to our activity.

Now that has been a bit of a digression, but I thought I should let you know the context in which I landed there.

The evening before the day I was supposed to leave Faizabad to return home to Delhi I suddenly remembered that I perhaps had a relative who was possibly in Ayodhya, heading one of the temples. I knew neither the name of the temple nor the name of the relative. But I knew I had to visit him. And I called my father the next morning.

“Pitaji, I am now in Faizabad and I want to see your elder brother who is said to be in Ayodhya.”

“Yes, yes. Do you remember his name and address?”

“Well, his name is Swami Kamalnayan, but I am not too sure about his temple’s name. I will need to check my diary. Can you hold?”

“I will call you back”, I said as I glanced at the STD booth meter climbing rapidly. Remember those were the early days of STD and the call rates were exorbitant.

“Do you now have the temple’s name?”

“Yes”, he said, “Vijay Raghav Mandir. It is near the Ayodhya Kotwali (police station)”. And then he dropped a bomb-shell. “I do not know whether he is alive or not, I had heard a few years ago that he died some 10 years earlier. But I am not too sure.”

“Ok, I will check this out.” I disconnected.

As the STD machine spat out the print-out of the receipt, I wondered. Here I am, in a strange place, trying to trace a relative who I had never seen. And now I am not even sure he is alive or dead!

And that too in a very turbulent time in Ayodhya. This was in July 1992, just 5 months before the demolition of the Babri Masjid. Those were tense times as old-timers of this post would remember.

I decided to take the plunge and seek out Swami Kamalnayan.

I requested a colleague to join me in this quest. I told him briefly the context and he agreed promptly. The approach to Vijay Raghav Mandir is hardly impressive. As we entered, a young sadhu asked us the reason for our visit. When we told him we wanted to meet Swami Kamalnayan he asked some perfunctory questions about how we knew him (“heard about him through my father who was a great bhakt”) and where we were from (“Delhi, of course”). He led us then to a room and bade us to sit on a carpet. “Swamiji is doing puja, he will join you in half-an-hour”.

37 minutes of toe-examination, carpet-scanning, ceiling-and-wall-staring and gazing-at-the-sky-through-the-window was getting on our nerves. My colleague and I dared not indulge in small talk in the hallowed -and very quiet- precincts of the Mandir. We were also getting late for our next appointment.

Then in walked a slightly-built old man, complete with a white beard and moustache. With a strong and confident gait. He must have been some 93 years old then.

My first thought was, “Hey, even if this guy is not Pitaji’s brother, then I should treat him as one”. His resemblance to my father was nearly complete though this old man had a beard and was at least 25 years older to Pitaji.

“Kya naam hai tumhaara?” he asked, what is your name

Swamiji ignored all other details and zeroed-in only onto my name.

“Kya kartey ho Santosh, aur yahaan kaisey aaye ho?” (What do you do Santosh, and what finds you here?)

Swamiji refused to recognize any other detail but for my name.

I explained to him why I was there at Ayodhya. And what I did. And what I studied. He could understand an engineering degree, but not an MBA which I had to explain to him.

He kept gazing intently at me all the while. As I did too. The same style of speaking, the same demeanour. And the same gentle, but searching look in his eyes. Just like Pitaji’s.

He offered us Prasad, which we accepted.

And I requested him for some pics, which he initially refused.

“Kya awashyakta hai photo ki, tum mujhsey mil hi chuke ho.” (why this need for a picture when you have already met me?)

After some persuasion, we did manage to get him to pose for some pics. Some by himself, some with me.

Then there was time for goodbye. We touched his feet and departed. I turned back and looked at him. And I could see him staring at me intently.

And then we were out of the door.

So that was an account of my first- and only- meeting with Swami Kamalnayan- my tauji, my badka babuji.

This entry was posted on Wednesday, November 25th, 2009 at 5:41 pm and is filed under Uncategorized. You can follow any responses to this entry through the RSS 2.0 feed. You can leave a response, or trackback from your own site.

23 Responses to A meeting with Swami Kamalnayanji, my tauji