But first, the Bhog coupons. I knew I would not be able to wake up early enough to get those limited edition coupons, so I had requested my father in advance to do the needful. And it was finally a kind neighbor who saw my father walking to the Puja Pandal and volunteered to get them. Coupons obtained, and it was time to see some dear relatives after a late, late breakfast. We got back home late but there it was, the Bhog! All set on the dining table complete with the special vegetable and payesh. And a little helping of pickles as well!

Bhog, after 18 years! Some of you may know of my fondness for khichdi, but Bhog transcends any definition, way beyond a mere khichdi! That consistency, that right level of spices and the right level of sugar. And the earthen pots it is served in adds to the flavor. No wonder it is called “Moha-Proshad“!

Today was also the day for exploring some of the grand pandals of Jamshedpur.

Or a lesson in grand architecture from around the world.

First stop at Bhuiyandih Puja Committee’s Puja Pandal. This is a replica of the Sacre Coeur Church of Paris. Perhaps it looks better than the original! 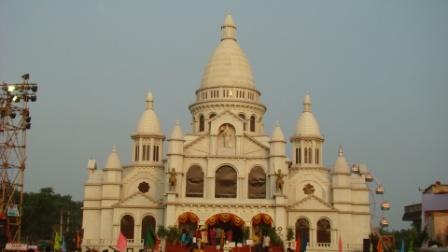 The intricate detail work is amazing: 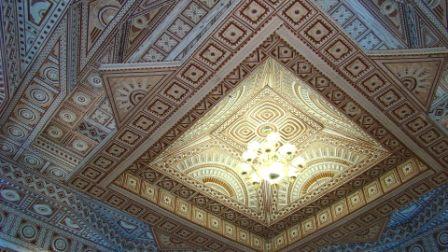 Then on to Kashidih at the “Thakur Pyaara Singh Dhurandhar Singh Club”. This one is gigantic, probably based on Kailash Parbat. Or was it Kedarnath? Complete with huge statues of Lord Shiva.  And what detailing! Truly majestic! 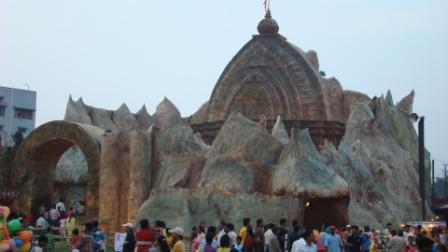 Lord Shiva statue at the pandal

And the 3-storey temple structure at L-4 Area, Sidgora. I was not able to place which famous temple this is based on, but it was impressive! 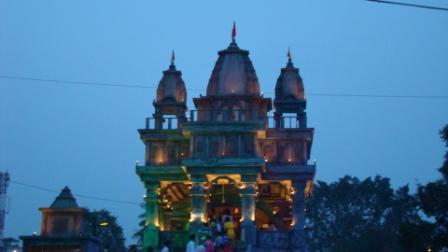 And the dhakis playing at the pandal were on a divine trip of their own. Each one of them in his own trance! 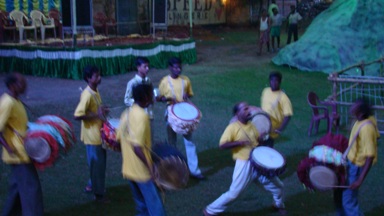 Care for Harry Potter’s school, Hogwarts? Find it at New Sidhgora Puja Committee’s pandal at the “Cinema Maidan“. My elder son, an avid fan of H. Potter freaked out on this one! 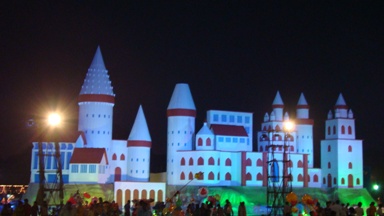 Then on to Thakkar Bapa Club at Dhakidih. An ethereal structure drenched in moonlight it seemed! 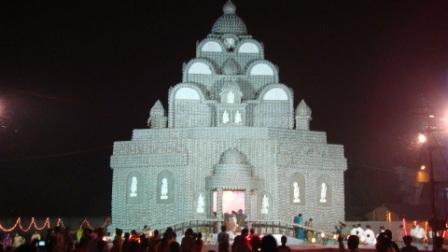 A closer inspection revealed thousands and thousands of silver-painted baskets which form the façade of this pandal. Check-out the close-up. 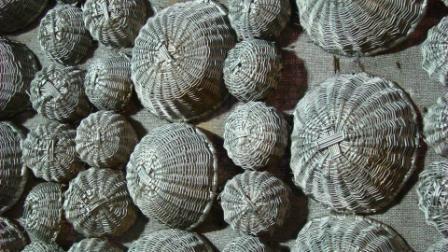 And then onto a Puja which is not famous for the pandal. But I rmember visiting this Puja each year when I was a kid. The Puja at Utkal Association. The USP of this was that the Protima was made in the same colour, year-after-year. In an off-white colour. (“Champa” colour is what one of the organizer told me today) However, this year, for some inexplicable reason they have the Protima in a mauve shade! Nothing wrong, but just that it felt a bit odd to see a non off-white statue there! 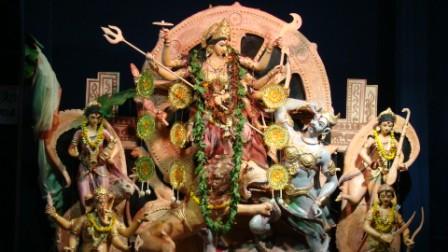 Just one word: marvelous! See for your self: 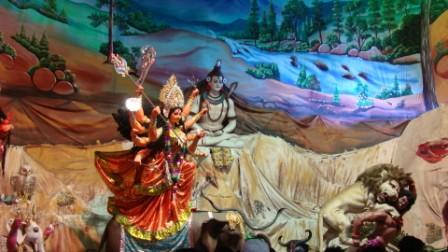 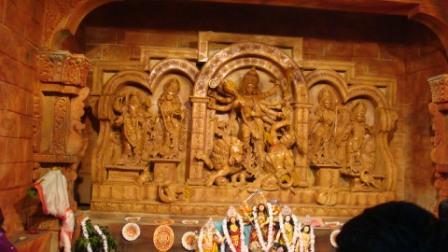 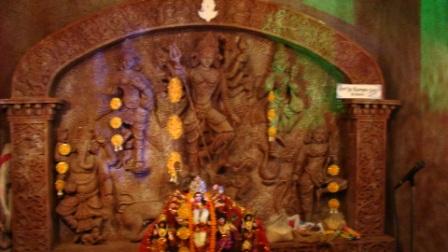 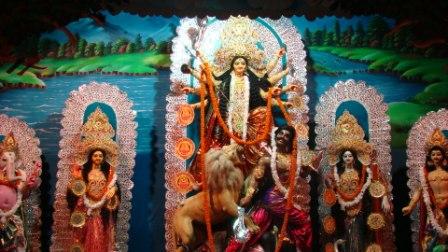 The Transportation and Food:

We covered a fair amount of geography today thanks to my brother-in-law who was driving us around. I am glad he offered to do this.

He took us to some of the best pandals. He knew exactly where to go and how to reach there despite some crazy traffic and with many key roads being closed. And he could always find parking close to each pandal. So minimum walking for us.

Taxi hire costs Rs 300 an hour during the Pujas! Even the humble tempo (auto-rikshaw for the non-Jamshedpurian) costs Rs 100 an hour! I had hired a car for 12 hours a few days earlier and paid just Rs 675! What a rate escalation for the Pujas!

When we were kids we would clamber onto Pitaji‘s Lambretta scooter, the youngest kid standing in the front with two or three kids sitting behind Pitaji. We would carry a wish list of the pandals we had planned to see. On return home each of the pandals seen was ticked and heated discussions took place on the favorite protimas. I do not remember any discussions around favorite pandals. Probably as they they were all of pretty much similar quality, give or take a unique design element or two.

Another wise decision taken by my brother-in-law was to separate  pandal-hopping from eating. So we had phuchkas (divine!) at the vendor next to Bengal Club, the dosa at Utkal Association (dosa crust and chutney to die for!) and egg-chicken roll (encasing succulent chicken kababs) next to Regal Cinema at Bistupur. When you need to eat, why not choose the best?

All of us took turns at doing the Abhinav Bindra trick; Rs 5 for 5 shots. And tons of balloons to burst. So you had to be shooting in completely the reverse direction to miss bursting a balloon with any shot. 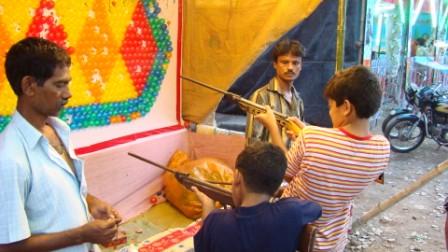 At the Shooting Range 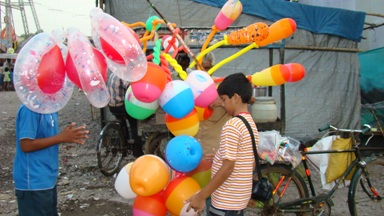 Checking out the Balloons

And eyeing the jhoolas but too scared to climb atop fearing safety. 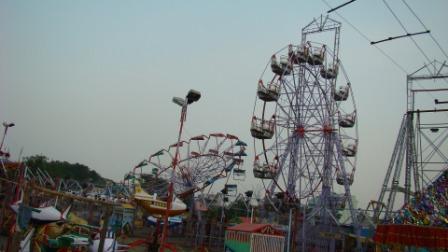 The jhoolas we did not ride

I discovered a favorite childhood toy. Let me attempt describing it in words: A flat circular drum fixed around a stem which when rotated at reasonably high speeds causes a short “stick” attached to the stem to strike the diaphragm of the drum and make a thoroughly pleasing (to the kid) continuous rat-tat-tat sound. Confused? See the visual below: 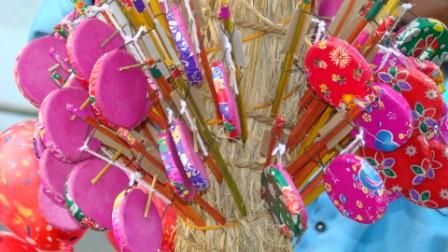 Maybe tomorrow will be my lucky day!

You may want to read the posts on shashthi, ashtami and navami.

This entry was posted on Monday, October 6th, 2008 at 10:02 pm and is filed under Uncategorized. You can follow any responses to this entry through the RSS 2.0 feed. You can leave a response, or trackback from your own site.