Mauritius 4: The seven-coloured earth of Chamarel

Would you pay money and drive an hour to take a look at a cordoned piece of undulating earth? What if you were told that the earth under discussion had seven different colours? “Nonsense”, you would say, “not possible”!

We decided to keep our scepticism away and made an expedition to Chamarel, in the south-west of the island. A drive through lush-green sugarcane plantation which morphed quickly into a coffee plantation, we soon approached this major tourist attraction of Mauritius, the seven-coloured earth of Mauritius. But before we could see the seven colours, there was another attraction to be relished first, the Waterfall of Chamarel. A quick flight of steps to the railed observation post and we were watching one of the most gorgeous waterfalls we had ever seen. Three distinct stream plunging down nearly a 100 meters down into the gorge. Clean, clear and without any fuss! Just a sheer drop!

A fellow tourist happily accepted our camera to take our family picture against the backdrop of the waterfall. He fussed with the camera, must have zoomed in and then zoomed out and vigorously motioned us to shift to one side yelling, “kaskaade, kaskaade“. It took us a while to figure out what this friendly soul was fretting about. Kaskaade sounded like cascade and cascade approximately translates to waterfall. We were obviously hindering a clear view of the waterfall in our eagerness to huddle together for a snap. Quick nudges amidst us, a sharp click and the fellow tourist bounded towards us pointing at the LCD screen of our Sony cyber shot. There we were, a very happy family of four Ojhas and the three clean streams of the cascade (French for waterfall).

Then a short drive to view the famous Chamarel seven-colored earth. To say we were surprised at what we saw would be an understatement. There was this expanse of clay, amassed as undulating dunes, shining brightly under the sun in multiple hues! Red, yellow, purple, dark brown, black, white, dark green, light brown……..multiple colours layered over each other like so many different species of giant serpents, each of a distinct colour, sleeping cozily entwined. 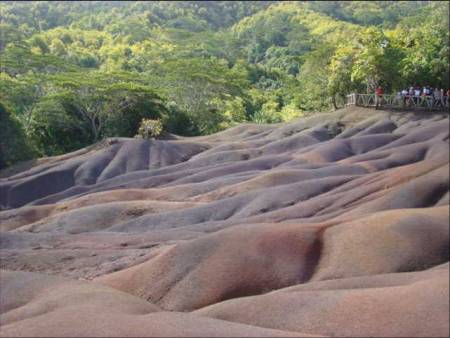 We really could not believe our own eyes and had to take recourse to multiple slide-shows of the pics we had taken (as well as a video panning the landscape) before we came to the conclusion that we had, indeed, seen what others had done for decades before us, the magic of nature! Basalt rock weathered by years of rains and sunshine undergoing chemical reaction over the millenia presenting us a spectacle to behold.

Much arguments amidst us on which colours each one of saw, we decided to agree to disagree. After all, one man’s light brown could be another person’s yellow but we all agreed eventually that the clay did indeed have myriad distinct colors and while the color gold itself was not seen by us, we knew we had struck gold in this visit! A reverential “parikrama” around the periphery of this cordoned piece of magically colored section of earth and we were ready to leave for our next destination!

This entry was posted on Thursday, September 11th, 2008 at 4:58 pm and is filed under Uncategorized. You can follow any responses to this entry through the RSS 2.0 feed. You can leave a response, or trackback from your own site.

One Response to Mauritius 4: The seven-coloured earth of Chamarel